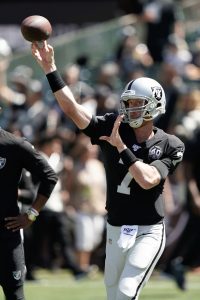 Glennon, a veteran signal caller, will sit behind Gardner Minshew on Jacksonville’s depth chart. He’ll offer a safety net – not just for injuries, but also for potential hiccups. Minshew, a 2019 sixth-round pick, showed some serious potential last year, but the mustachioed magic cooled over time. All in all, the soon-to-be 24-year-old performed well as he stepped in for Nick Foles – first for injury, then for performance reasons. In 14 games, Minshew threw for 3,271 yards and 21 touchdowns against six interceptions.

For Glennon, this marks a return to the Sunshine State. The former Buccaneers passer will have a chance to see his old friends when they square off in the preseason this summer.

Glennon profiled as one of the best veteran quarterbacks left on the market, even if he wasn’t the most accomplished of the bunch. Cam Newton and Joe Flacco are still looking for work; ditto for Blake Bortles, the former No. 3 overall pick of the Jaguars.

Glennon, entering his eighth year in the league, came into the NFL as a third-round choice of the Bucs in 2013. After signing a lucrative and ill-fated free agent deal with the Bears in 2017, he hooked on with the Cardinals in 2018. Last year, he joined up with the Raiders and lobbed a grand total of ten passes. For his career, the 6’6″ vet owns a 6-16 record as a starter.