Adrian Peterson has big plans for 2020. The 35-year-old is 1,054 rushing yards away from passing Barry Sanders on the league’s all-time board and he believes that he might have enough gas in the tank to overtake Emmitt Smith’s No. 1 position. In February, the Redskins exercised his option for 2020, but that doesn’t necessarily mean that the veteran will be in D.C. this year. 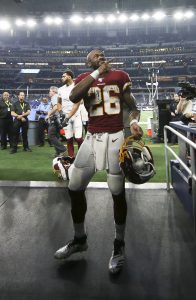 Peterson was already facing backfield competition from Derrius Guice and Bryce Love when the Redskins picked up his option, but the RB depth chart became even more crowded in the spring. First, the Redskins signed former Buc Peyton Barber to a two-year, $3MM free agent deal. Then, in April, they used a third-round pick to select Antonio Gibson out of Memphis. Gibson, a young and sure-handed playmaker, more or less has his roster spot cemented. That leaves no more than three – and, possibly, only two – running back spots up for grabs. Peterson, one of the most electrifying rushers the game has ever seen, could be the odd man out.

Peterson is set to earn $2.25MM in base pay this year, but the Redskins can drop him without much fiscal penalty. Cutting Peterson would leave the Redskins with just $750K in dead money, versus $2.48MM in savings. Would that be the smart move? There’s a case to be made in both directions. Peterson offers veteran leadership for the Redskins’ inexperienced backfield and could serve as a safety net for Guice if the former LSU star gets sidelined again. He’s also delivered for the last two years in D.C., despite the skeptics who said he was washed up. Between 2018 and 2019, Peterson has averaged a solid 4.2 yards per carry while suited up for 31 of a possible 32 games.