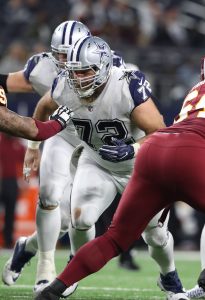 Frederick landing on the list will free up $7MM in cap room for Dallas. By adding Frederick to the reserve/retired list after June 1, the Cowboys will spread his cap hit across two years.

This contract will still comprise $4.975MM of Dallas’ 2020 cap and count more than $6MM against the team’s 2021 payroll, per the Dallas Morning News’ Michael Gehlken (on Twitter). The deal was set to count more than $11MM on this year’s payroll. Frederick had signed a lucrative extension in 2016 and restructured his deal multiple times.

The 2020 season would have been the decorated blocker’s age-29 campaign. But Frederick’s battle with Gullain-Barre syndrome forced him to call it quits. He had previously missed the entire 2018 season because of the malady, but the five-time Pro Bowler returned in 2019. During the seasons he played, Frederick never missed a game in his career.

Dallas will likely move forward with the recently re-signed Joe Looney — who took over for Frederick at center in 2018 — succeeding Frederick, with fourth-round pick Tyler Biadasz developing behind him. Connor McGovern 2.0 also looms as an option in the Cowboys’ post-Frederick era.