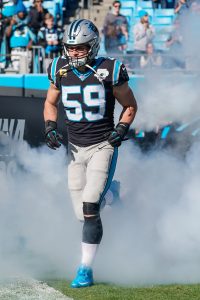 By waiting until after June 1 to do so, the Panthers will spread out Kuechly’s $11.8MM in dead money over two years. For 2020, it will create almost $6MM in cap space for the Panthers, Joe Person of The Athletic tweets.

This will give Carolina some additional breathing room, bumping its cap-space figure north of $8MM. That will be necessary for the franchise to sign its draft class, though the Panthers have already signed first-round pick Derrick Brown.

Kuechly retired at 28, with two seasons left on his five-year, $61.8MM contract. The future Hall of Famer would have been set for a mammoth extension, with top peer Bobby Wagner taking the off-ball linebacker market to $18MM per year in 2019 and the Panthers having recently inked Shaq Thompson to a more lucrative deal than the one on which Kuechly finished his career. But Kuechly, who battled concussions in previous years, opted to walk away after eight seasons.

The Panthers attempted to address their considerable void by signing ex-Lions and Raiders starter Tahir Whitehead, who played for Matt Rhule at Temple. Although the Panthers made seven draft picks on defense, they did not use any of those selections on a linebacker.