Patriots Were Cam Newton’s Only Offer

The Patriots represented Cam Newton‘s one and only contract offer, according to ESPN.com’s Adam Schefter (on Twitter). The Browns also showed recent interest, Schefter hears, but they did not put a deal on the table. 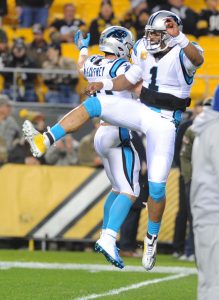 Several clubs were connected to Newton, but his free agency dragged on far longer than anyone expected. Now, we know why. Previously, we heard that the Chargers considered him, and Newton’s former head coach Ron Rivera at least thought about bringing him to the Redskins. Still, neither club presented a deal to Newton and his talks with the Browns “never really went anywhere,” per Schefter.

All along, Newton has been seeking an opportunity to start – ideally, with a contender. He found the perfect match in the Patriots, who were previously set to weigh the likes of Brian Hoyer and youngster Jarrett Stidham. With the Browns, Newton would have been entrenched as the QB2 behind Baker Mayfield, and that probably didn’t hold much appeal for him anyway.

With that lack of interest, the Patriots were able to land Newton for an absolute bargain. He can earn up to $7.5MM in 2020 through incentives, but his base salary is much, much lower.

48 comments on “Patriots Were Cam Newton’s Only Offer”