NFL teams will often use contract bonuses as a way to spread out a cap hit that might otherwise be exorbitant. For example, if a player’s four-year deal includes a $8MM signing bonus, that money can be paid immediately but spread out over four years for cap purposes. This way, the cap charge for the bonus amounts to $2MM per year for cap purposes, rather than $8MM in year one. 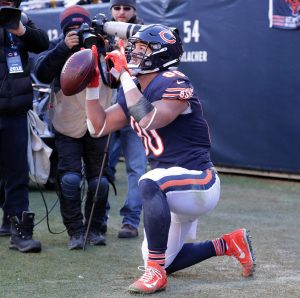 There’s an obvious benefit to kicking the can down the road, but it can also hurt teams if they want to terminate that deal. If the club in the above scenario wanted to release the player in the second year of his contract, it would still have to account for that remaining prorated bonus money. Rather than counting on the cap as $2MM per year for two seasons, that dead money “accelerates,” and applies to the cap for the league year in which the player is released. In other words, the remaining $4MM in prorated bonus money immediately counts against the cap.

Although these rules apply to many cuts, a different set of rules is in place for players released after June 1. In that case, a team can spread the cap hit across two seasons rather than one — for the current season, the prorated bonus figure stays at its original amount, with the remaining bonus balance accelerating onto the following season. Referring again to the above scenario, that means the player would count against the cap for $2MM in the league year in which he was cut, with the remaining $4MM applying to the following league year.

The guidelines for pre-June 1 and post-June 1 cuts are fairly straightforward, but things become a little more complicated when we take into account that teams are allowed to designate up to two players as post-June 1 cuts even if those players are released before June. This offseason, we’ve seen a handful of players designated as post-June 1 cuts: Trey Burton (Bears), Desmond Trufant (Falcons), Trumaine Johnson (Jets), and Todd Gurley (Rams).

In the case of Johnson, the Jets were initially slated to pay him $11MM in base salary this year. Under typical circumstances, the release would have left Gang Green with a $12MM dead money obligation for 2020. However, through the post-June 1 designation, they will unlock $11MM in cap space starting on Tuesday with just $4MM in dead money this year. In 2021, they’ll be faced with the remaining $8MM charge.

Because the cap charge for the current league year isn’t reduced until June, designating a player as a post-June 1 cut hasn’t been hugely advantageous for teams historically. Typically, by June, just about every notable free agent is off the board. However, this year is a bit of a different story – Jadeveon Clowney, Logan Ryan, Larry Warford, and other notable vets are still on the board.

Free agent opportunities aside, releasing a player in the spring and designating him a post-June 1 cut can be mutually beneficial for a player and his team. It allows the player to hit the market when potential suitors still have cap room and are still looking to add free agents, and it allows the club to spread out the player’s cap charge without having to actually wait until June 1 to release him — waiting until that point could mean paying roster or workout bonuses in the interim. Additionally, even if the team doesn’t need that June cap space for free agency, it can come in handy for signing draft picks.