Russell Wilson has lobbied for the Seahawks to sign Antonio Brown, and the free agent wide receiver would not mind resuming his career in Seattle. 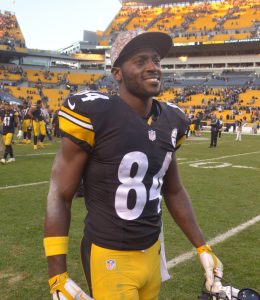 The duo worked out together this week, and Mike Garafolo of NFL.com reports Brown would love to play for the Seahawks (video link). Additionally, the Seahawks have engaged in internal discussions about signing Brown, per Garafolo. They are now the team most closely connected to the former perennial All-Pro.

Other teams are interested as well, per Garafolo, though it is not certain who those franchises are at this point. The team that signs Brown would need to prepare for a suspension. The NFL’s investigation into the wide receiver’s off-field issues is ongoing.

The Seahawks signed Phillip Dorsett this offseason, and he would seemingly enter camp with a good chance of winning the team’s No. 3 wideout job behind Tyler Lockett and D.K. Metcalf. A Brown signing would shake up the Seahawks’ passing attack. The former Steelers superstar earned first-team All-Pro acclaim in four straight seasons and scored 15 touchdowns in 2018, the year his All-Pro streak ceased. Brown’s actions since Week 17 of the 2018 season have made him one of the most volatile players in modern NFL history, with the soon-to-be 32-year-old receiver burning bridges at will.

Other than the three teams that employed Brown last year, the Saints were the other known suitor. They worked Brown out late last season, but even that produced controversy. Tom Brady‘s interest in having Brown play with him in Tampa Bay is well known, but the Buccaneers are not believed to be interested. Brown has been quieter on social media in recent months, and it is starting to look like he will be given a chance to return to the league at some point this season.