Chargers defensive end Melvin Ingram had been sitting out of practice in hopes of getting a new deal. He doesn’t have a new deal yet, but he does have some newfound security. 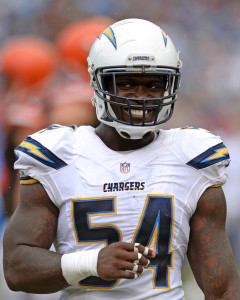 As Mike Garafolo of the NFL Network reports (via Twitter), Ingram signed an adjusted contract that guarantees his 2020 salary, which checks in at a hefty $14MM. While the Bolts were unlikely to cut Ingram to save that money, the 31-year-old is now assured of earning a very nice income this season. As such, he has returned to the practice field.

It’s unclear what, if anything, this means for contract talks between player and team, though both sides have benefited from their eight-year relationship. From 2015-18, Ingram started every game for the Chargers and averaged nine sacks per season. Though he missed three games last season due to injury, he collected his third consecutive Pro Bowl nod.

The South Carolina product may not be one of the league’s most feared pass rushers, but he is consistently able to apply pressure to opposing quarterbacks, and those types of players get paid handsomely in today’s NFL. He is shooting for one last big-money contract — he is entering the final year of the four-year, $66MM deal he signed in 2017 — and he has a good chance of getting it, whether that happens this season or in 2021.

If the Chargers’ key defenders can stay healthy this year, the club will have a good chance to rebound from a disappointing 2019 season and return to the playoffs.