The Chiefs now have a little bit of extra cap room, thanks to a revised deal with Alex Okafor. The defensive end has agreed to a pay cut that will earn $2MM off of KC’s cap (Twitter link via NFL.com’s Tom Pelissero). In exchange, Okafor will reach free agency next March, one year earlier than originally planned. 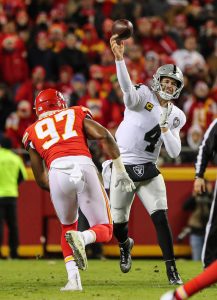 The new deal will pay Okafor a maximum of $4.96MM, with $860K coming by way of per-game roster bonuses and $2MM in incentives. After that, he’ll hit the open market. Originally, this was slated to be the sandwich year in Okafor’s three-year, $18MM deal, inked last year.

Okafor’s first year with the Chiefs ended on injured reserve. Before that, he was playing fairly well. In ten games (nine starts), he racked up five sacks.

The talent-loaded Chiefs have made a handful of moves this offseason to make the numbers work. Previously, they restructured Frank Clark‘s deal and re-signed Sammy Watkins to a new contract that came with a sizable pay cut. All in all, the Chiefs are now left with about $15MM to spend.