The Falcons will release veteran guard Jamon Brown, according to ESPN.com’s Field Yates (on Twitter). This move will be somewhat costly for the team, but it also may signal a potential long-term starter is ready to begin his first-string tenure. 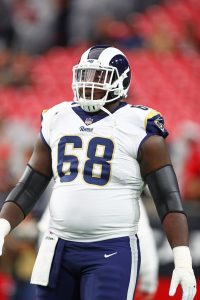 Brown started nine games for the Falcons last season but has been vying for the team’s left guard job with third-round rookie Matt Hennessy. The latter, drafted as a center out of Temple, may be on track to winning that battle, Yates adds. However, the Falcons still employ veteran James Carpenter as well.

Atlanta signed both Brown and Carpenter last year, and those acquisitions preceded the team’s first-round selection of Chris Lindstrom. The latter missed much of his rookie season. Brown was due $4.75MM in guaranteed base salary from the Falcons this season. As of Monday afternoon, the Falcons only held $8.4MM in cap space. This transaction will cut into that figure.

The veteran guard has bounced around a bit since a 2018 suspension resulted in him losing his Rams starting job. The Giants claimed Brown on waivers after the Rams cut him, and the Falcons signed him to a three-year, $18.75MM deal last March.