Grant Delpit has suffered a season-ending Achilles tear (Twitter link via Ian Rapoport of NFL.com). The Browns will place the safety on IR, ending the rookie’s season before it could even begin. 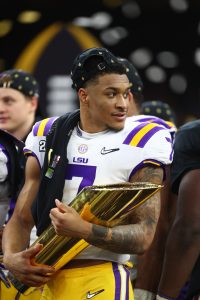 Delpit was widely viewed as a first-round prospected heading into his junior year at LSU. Then, his stock slipped a bit, allowing the Browns to scoop him up at No. 44 overall. He was expected to be a pillar of the Browns’ young secondary this year, alongside Denzel Ward and former Tigers teammate Greedy Williams. Instead, they’ll have to wait until next year to see what he can do.

Fortunately, the Browns have backup. New addition Andrew Sendejo figures to step into the starting free safety job and join Karl Joseph in deep coverage. Sendejo, a longtime starter for the Vikings, has been first-string for 61 of his career games. Still, he’s entering his age-33 season, and he doesn’t offer the same kind of tantalizing upside as Delpit.

This is just the latest training camp injury for the Browns, following linebacker Mack Wilson‘s knee injury and cornerback Kevin Johnson‘s lacerated liver. On the plus side, Johnson was released from the hospital rather quickly, which could allow for a relatively quick return to action.