The Raiders released Prince Amukamara earlier on Monday. The veteran cornerback is eyeing a reunion with a team that features a greater need at the position. 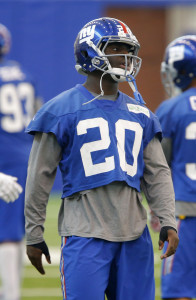 Amukamara would like to rejoin the Giants, telling the New York Post’s Steve Serby “it would be awesome” to return to New York and join the team that drafted him. Considering the Giants have changed coaches three times since Amukamara last played for the team, it is not certain the franchise views him returning in a similar light. But the Giants undeniably need help in the secondary.

The Giants have needed cornerback help for a bit now, with DeAndre Baker on the commissioner’s exempt list. The team that carried DVOA’s No. 31 pass defense last year also saw third-year contributor Sam Beal opt out last month. Logan Ryan has surfaced on the Giants’ radar and looks to have interest in signing, though his price tag has been an issue for teams since he entered free agency. At this stage of his career, Amukamara would be a much cheaper option. Ryan has also marketed himself as a safety, whereas Amukamara is a pure corner.

Moving to the Jaguars and Bears following his five-season Giants tenure, the former first-round pick signed a one-year deal for the veteran minimum with the Raiders. The Bears made him a cap casualty in February. The 31-year-old defender has been a full-time starter since 2012 and still views himself as a “top-64 corner” in the league, per Serby.