Iman Marshall‘s season is over. The Ravens placed the cornerback on injured reserve after he tore several knee ligaments, including his ACL. 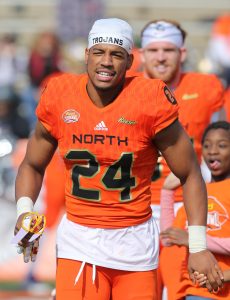 Marshall, a fourth-year pro out of USC, was pushing for one of the final spots on the Ravens’ CB depth chart. Marlon Humphrey, Marcus Peters, Tavon Young, and Jimmy Smith are set to lead the group, but there will be one or two more openings to fill.

Marshall also missed the bulk of his rookie season due to injury. He suited up for just three games, spending most of his on-field time with the special teams unit.

On the other side of the ball, the Ravens are doing their homework on Dez Bryant. Meanwhile, they’ve ruled out Antonio Brown, despite Lamar Jackson‘s strong endorsement.