Broncos To Meet With Blake Bortles

Former Jaguars and Rams quarterback Blake Bortles will meet with the Broncos on Tuesday afternoon, a source tells Adam Schefter of ESPN.com (on Twitter). The former No. 3 overall pick started for five seasons as a pro, but threw just two passes in 2019. 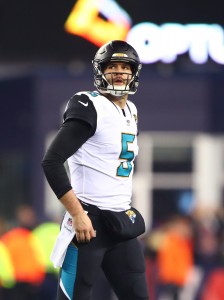 So far, Bortles hasn’t come close to living up to his draft status. Since Bortles entered the league with the Jaguars, roughly 20 quarterbacks have attempted at least 2,000 passes: among those signal-callers, Bortles ranks dead last in adjusted net yards per attempt, quarterback rating, and interception rate, and is second-to-last in touchdown rate.

Despite all of his flaws, the Jaguars handed Bortles a three-year, $54MM deal in 2018 with $26.5MM guaranteed. Oddly enough, he was the first 2014 first-round pick to receive an extension –ahead of stars like wide receiver Odell Beckham, defensive lineman Aaron Donald, and linebacker Khalil Mack. One year later, they pushed him out the door for Nick Foles, leading him to L.A.

The Broncos are in need of some help under center after losing Drew Lock for three to five weeks with a strained rotator cuff. For now, Jeff Driskel is slated to serve as the fill-in, but he’ll need a signal caller to backstop him. Depending on how the meeting goes, Bortles could be their Plan B.

One comment on “Broncos To Meet With Blake Bortles”