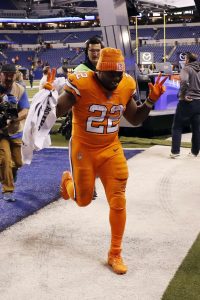 Best known for his five-year run with the Broncos, the 29-year-old back played for three other teams — the Rams, Panthers and Lions — and was briefly a Raider. He last worked out for the Seahawks in December.

A former Cal-Berkeley contributor, Anderson did not rush for more than 800 yards in his two seasons at the Pac-12 school. But he fared better as a pro, becoming a key cog with the Broncos after catching on as a 2013 UDFA. Anderson operated as Denver’s starter for the better part of four seasons and rushed for 3,051 yards — ninth in Broncos history — and 24 touchdowns during his time with the team.

The Broncos initially turned to Anderson as a starter late in the 2014 season, after injuries to Ronnie Hillman and Montee Ball, and the 5-foot-8 back ended that campaign as a Pro Bowler. A year later, his walk-off overtime run against the Patriots ended up securing the Broncos home-field advantage in the AFC playoffs. Anderson shined that postseason, rushing for 234 yards and two TDs in three playoff games to help the Broncos to their third championship.

Former Broncos OC Adam Gase attempted to bring Anderson to the Dolphins in 2016, but the Broncos matched a four-year, $18MM offer sheet. Anderson finished the 2017 season with his only 1,000-yard showing, but Denver cut him in 2018. This move, however, preceded Anderson helping the Rams to Super Bowl LIII. Playing at a slightly heavier weight, Anderson filled in for an injured Todd Gurley before working in tandem with the All-Pro back in the playoffs. The former cleared 100 yards three times in five games with Los Angeles, doing so despite being cut by the Panthers and Raiders that year.

Anderson plans to move into the coaching ranks, with an eye on one day being a head coach, and is eyeing a potential gig at a Power 5 conference, via Mike Klis of 9News (Twitter links).