The Eagles have circled back to Devonta Freeman. After considering the Pro Bowl running back this summer, the Eagles brought him in for a visit Friday, Field Yates of ESPN.com tweets. 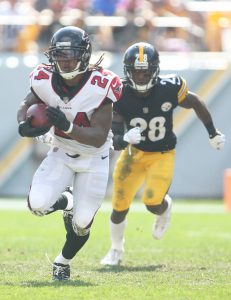 Philadelphia opted to stick with its holdover backs, after re-signing Corey Clement, going into the season but saw Miles Sanders miss Week 1 with a hamstring injury he suffered in camp. The Eagles were believed to be interested in Freeman over the summer, however.

Sanders is not listed on Philly’s injury report this week, but the team is still somewhat thin in its backfield. The Eagles have Boston Scott as Sanders’ primary backup, after allowing Jordan Howard to walk in free agency. Freeman would represent a major experience upgrade, though he has not been especially productive since 2017. The former Falcons starter missed almost all of the 2018 season due to injury and averaged just 3.6 yards per carry last year. The Falcons cut their two-time 1,000-yard rusher earlier this year.

Freeman, 28, turned down a one-year, $3MM Seahawks proposal this offseason. Seattle then moved on to Carlos Hyde. Freeman since fired his agent and hired Drew Rosenhaus. The Jaguars brought in Freeman earlier this month but did not sign him.