Manti Te’o is back. The Bears are signing the veteran linebacker to their practice squad, the team announced on Tuesday. Thanks to the NFL’s new COVID-19 rules, veterans are allowed on practice squads for the first time. 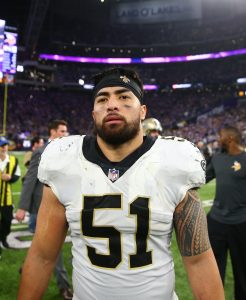 Te’o, an extremely accomplished college player who was a Heisman finalist at Notre Dame, was originally drafted by the Chargers in the second-round back in 2013. He was mostly a starter during his time with the team, but also struggled with numerous injuries. After his rookie contract expired, he signed a two-year deal with New Orleans.

He appeared in all 16 games with the Saints in 2017 and started ten, but took on a much smaller role in 2018, when he only started twice and was a healthy scratch at times down the stretch. He sat out most of last season before suddenly reemerging and signing with the Saints in December of last year. He played in the final few games, starting two.

We didn’t hear anything of him this offseason until the Bears decided to work him out last week. Clearly they liked what they saw. Still only 29 he should have something left in the tank physically, and it’ll be interesting to see if he gets called up to the active roster soon.