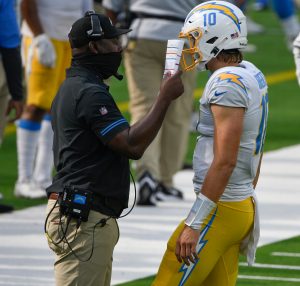 Lynn had previously kept the door open for Taylor to reclaim the job when he recovered from the chest injury a pregame shot aggravated just before the Bolts’ Week 2 game. In stepped Herbert, a rookie who was a candidate to sit behind Taylor for many games this season. But the rookie has outperformed expectations and will keep the starting job.

This represents another abrupt end to a Taylor bridge-QB period. The Browns moved to Baker Mayfield in Week 3 of the 2018 season, and Taylor did not start another game in a one-season Cleveland stay. His 2020 starting stint did not end up lasting that long. Taylor, who backed up Philip Rivers in 2019, will return to a QB2 role. Taylor, who started under Lynn in Buffalo during a three-season run as the team’s top quarterback, has not dressed since a lung-puncturing chest injection paused his season.

Although Herbert was linked to the Dolphins at No. 5 overall at points leading up to the draft, Scouts Inc. ranked the Oregon passer far behind Tua Tagovailoa overall. When the Dolphins drafted Tagovailoa, the Bolts quickly nabbed Herbert at No. 6. So far, the 6-foot-6 prospect has impressed. In Week 4, he helped the Bolts gain a three-score lead on the Buccaneers in a game that featured three Herbert touchdown passes — to UDFAs Tyron Johnson, Donald Parham and Jalen Guyton — and an 80% completion rate. Through three games, Herbert ranks 12th in QBR.

Herbert being ahead of the curve, despite some skepticism coming out of the draft and an offseason altered by the pandemic, would be a major win for a Chargers team that has enjoyed QB stability for most of this century. The Bolts signed a few 30-something veteran starters best suited to play for a contending team now. While the Chargers are 1-3, Herbert’s early promise would help the likes of Bryan Bulaga, Linval Joseph and Chris Harris contribute to a contender either in 2020 or ’21 — rather than play for a team dealing with uncertainty at quarterback.

4 comments on “Chargers To Keep Justin Herbert As Starter”