The Cowboys will not have Andy Dalton available in their annual Sunday-night game against the Eagles. They downgraded the veteran passer to out due to the concussion he suffered in Week 7. 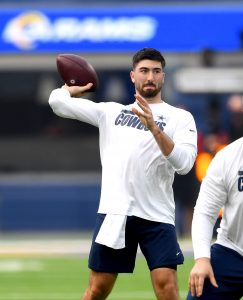 Third-stringer Ben DiNucci will start in Philadelphia. Dalton has yet to clear the protocol after taking an illegal hit from Washington linebacker Jon Bostic, and it will result in an unusual starting offense for the team many expected to win the NFC East this season.

Dallas is already down starting tackles Tyron Smith and La’el Collins for the season. Although Cameron Erving is back from IR at right tackle, DiNucci will represent an obvious change for a team that has not needed to deviate from its quarterback plan in many years. Dak Prescott started 64 straight games from 2016-19. DiNucci being summoned to start reminds of the 2015 season, when Tony Romo‘s injuries resulted in the Cowboys giving starts to Matt Cassel, Brandon Weeden and current OC Kellen Moore.

DiNucci spent the past two seasons as the starter at Division I-FCS James Madison. The former Pitt recruit led the Dukes to the D-I-FCS national championship game, when they lost to North Dakota State and likely 2021 first-round pick Trey Lance. While DiNucci led the FCS level with a 71% completion rate last season and accounted for 35 TDs (six rushing), his forced ascent illustrates how far off course this Cowboys season has drifted. DiNucci completed 2 of 3 passes for 39 yards and took three sacks in Dallas’ 25-3 loss to Washington.

The Cowboys have Garrett Gilbert in place as DiNucci’s backup. Despite being drafted in the 2014 sixth round, Gilbert has only played in six games and thrown six passes as a pro.

3 comments on “Cowboys Rule Out Andy Dalton For Week 8”