Earl Thomas has followed through with the rumored grievance he was planning to file against the Ravens, per Aaron Wilson of the Houston Chronicle (on Twitter). The free agent safety was due a $10MM base salary this season, but the Ravens cut him in August. They will now be forced to carry some of Thomas’ salary on their books. 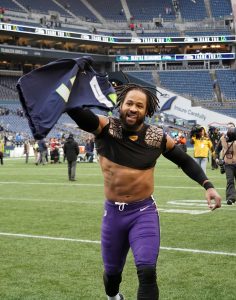 Baltimore’s cap sheet now includes a $5MM Thomas number, Mike Florio of Pro Football Talk notes, with teams having to carry half of players’ salaries while grievances are pending. The Ravens terminated Thomas’ contract in August, and the team’s language pointed to a conduct-detrimental release. Thomas’ 2020 salary was guaranteed for skill and injury, setting up this grievance. The Ravens signed Thomas to a four-year, $55MM deal in March 2019.

This marks the first piece of Thomas news in a few weeks, which is certainly notable given his All-Decade acclaim and age (31). The Cowboys were linked to Thomas shortly after his Ravens release. Despite once offering the Seahawks a second-round pick for the All-Pro defender, the Cowboys passed. The Texans were set to work out Thomas earlier this season, but they moved in a different direction — after some reported pushback from players.

As a result of this grievance, the Ravens’ cap space dropped under $5MM. Without Thomas, Baltimore’s defense ranks fourth in DVOA. The Ravens have used Chuck Clark and DeShon Elliott as their safety starters.