The Lions may have their full assortment of cornerbacks for the first time this season. They activated slot corner Justin Coleman from IR on Saturday, ending his five-game absence. Detroit made room for Coleman by waiving running back Bo Scarbrough. 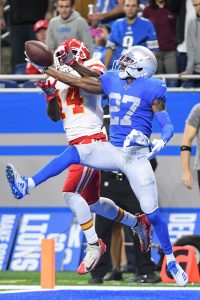 A big-ticket free agent in 2019, Coleman went down with a hamstring injury during Detroit’s season-opening loss to Chicago. He will be back for the Lions’ Week 8 tilt against the Colts. This marks the second season of Coleman’s four-year, $36MM deal.

Detroit has been without Coleman, Desmond Trufant and No. 3 overall pick Jeff Okudah at various points this season. Trufant missed the past two games with a hamstring injury, but the ex-Falcon cover man participated in two limited practices this week. Okudah battled a hamstring injury earlier this year as well and missed Week 1. The Lions rank 14th in pass defense DVOA, creating a somewhat promising outlook for their coverage capabilities with Coleman, Trufant and Okudah playing together.

Scarbrough returned from IR earlier this month but does not factor into Detroit’s backfield like he did down the stretch last year. Despite being a midseason pickup, the Alabama alum started five games for the Lions. With Adrian Peterson, D’Andre Swift and a healthy Kerryon Johnson in the picture now, the Lions do not have as much use for Scarbrough.