Shortly after he was released by the Bills, veteran guard Quinton Spain is taking a visit with a new prospective employer. As Ian Rapoport of NFL.com reports, the Bengals will be hosting Spain later this week (Twitter link). 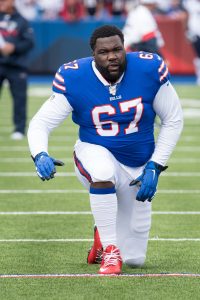 Cincinnati’s offensive line has been a disaster, and the team needs to do something to protect rookie signal-caller Joe Burrow, who has looked good in his first professional season, but who has been sacked 19 times through six games. Though Burrow has made some youthful mistakes in holding onto the ball too long on occasion, Football Outsiders’ advanced metrics indicate that the Bengals’ O-line is among the worst in terms of both pass-blocking and run-blocking.

Enter Spain, who has started 66 games at left guard and who has established a reputation of being a strong pass blocker. Though the 29-year-old lost his starting job with Buffalo this year, the Bills did think highly enough of him to give him a three-year, $15MM deal this offseason. Though he may not be a top-tier protector, he would certainly be a welcome addition to the Bengals’ offensive front.

Second-year pro Michael Jordan has played every snap for the club at LG thus far, but he has struggled, particularly in pass-blocking.