It’s official. Dez Bryant is back in the NFL — this time, with the Ravens’ practice squad (Twitter link via NFL.com’s Ian Rapoport). This was the anticipated news following the wide receiver’s workout with the team late last week. 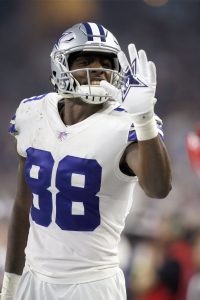 The former Cowboys All-Pro first auditioned for the Ravens over the summer, marking his first showing since he suffered an Achilles tear in 2018. The Ravens’ interest in Bryant goes back much further than that, however. Bryant famously rejected their three-year, $21MM offer after his divorce from Dallas. Then, he lingered in free agency for several months before signing a far less lucrative one-year deal with the Saints. That, unfortunately, didn’t last long – Bryant’s season ended on the practice field before he could suit up for New Orleans in live action.

A quick promotion could lead to Bryant’s debut this Sunday against the Steelers. Otherwise, he’ll be at the ready for the 5-1 Ravens.