Florida State cornerback Asante Samuel Jr. announced that he will opt out in order to focus on the 2021 NFL Draft. Samuel — the son of four-time Pro Bowler Asante Samuel — profiles as a potential early-round pick. 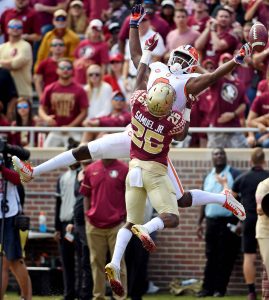 “The last three years at Florida State has had its ups and downs, but I will forever cherish the memories and relationships that I have created while I was here,” Samuel said in a statement. “When I committed to Florida State, I didn’t realize how much I would grow as a football player, and better yet, as a person. I’m thankful for my family, teammates, coaches, the athletic trainers, academic staff and fans for always guiding and supporting me throughout the years.”

Samuel leaves FSU with 97 stops, four interceptions, and 29 pass breakups across three seasons. He thrived on the whole, despite a down stretch for the Seminoles and a recent coaching staff overhaul. At 5’10”, he lacks the prototypical size for the cornerback position, but the same could be said of his dad who was only an inch taller.