Has Odell Beckham Played His Last Game For The Browns?

The Browns have lost wide receiver Odell Beckham Jr. for the season thanks to a torn ACL, and Ian Rapoport of the NFL Network says there is a “very real possibility” that OBJ has played his last game for Cleveland (video link). 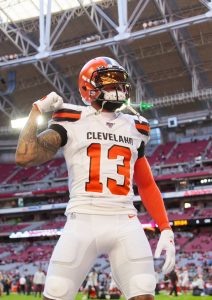 Of course, this is not the first time we have heard reports that Beckham’s days with the Browns could be numbered. Towards the end of his disappointing first season in Cleveland in 2019, it was reported that Beckham wanted out and that he had approached opposing players and coaches before (and even during) games and told them, “come get me.” His name cropped up in trade speculation again in the spring, but team sources refuted the notion that OBJ could be on the move, just as they did a few months later.

It would be a stretch to suggest that the Browns are a better team without Beckham, who is a premium talent. But it’s also true that QB Baker Mayfield performed well as a rookie in 2018 without Beckham, struggled in 2019 with him, and was terrific in a win over the Bengals last week after Beckham left the game due to injury. There are a whole host of explanations that have nothing to do with Beckham, but as Rapoport observes, OBJ has never really embraced Cleveland and has never developed a rapport with Mayfield, who often looks as though he is trying to force-feed the ball to his star wideout.

Beckham cannot really be traded until the spring or summer of 2021. $12MM of his 2021 salary will become fully guaranteed in March, before he will be recovered from his ACL injury. After that, though, all of his guarantees will have been paid out, and the rest of his contract looks quite palatable for an interested team (Beckham is due to earn $14.5MM in 2021 and $13.75MM in 2022 and 2023, with $1MM roster bonuses and $250K workout bonuses each season).

So depending on how the rest of the year goes for the Browns — who are sitting at 5-2 and have a very favorable schedule the rest of the way — OBJ may find himself on his third team before the 2021 season begins.

8 comments on “Has Odell Beckham Played His Last Game For The Browns?”