Alex Smith is back as Washington’s starting quarterback. Kyle Allen went down with an ankle injury that looked gruesome initially but thankfully turned out to be not quite as serious as it appeared. 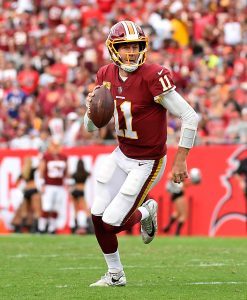 Allen has a dislocated ankle with only a small fracture, a source told Tom Pelissero of NFL Network (Twitter link). The injury will “likely” sideline him for the rest of the year, Albert Breer of SI.com tweets, although he does have a shot to return. Head coach Ron Rivera confirmed after the game that Smith will be the starter next week, with 2019 first-rounder Dwayne Haskins being bumped up to number two.

Smith lit it up to start the second half and get Washington back into their game against the Giants, but back to back interception on the final two drives sealed their 23-20 loss. Next week against the Lions will be Smith’s first start since his own devastating lower leg injury that he suffered midway through the 2018 season. No matter how he fares moving forward, it’s been a truly remarkable comeback and we’re all rooting for him.

It’s a tough blow for Allen assuming he’s done for the year, as he isn’t likely to get handed a starting opportunity like this again next year. The 2018 UDFA was brought in specifically by Rivera after they spent time together with the Panthers, and he was coming off a great game against the Cowboys when we went down.

5 comments on “Kyle Allen Likely Done For The Year”