Packers Split On Trading For Texans’ Will Fuller

There’s disagreement among high-level Packers officials on whether the long-term cost of an elite receiver like Will Fuller would be worthwhile, Dianna Russini of ESPN.com tweets. The Packers have discussed Fuller with the Texans, but it’s far from a given that they’ll complete a trade before the afternoon deadline. 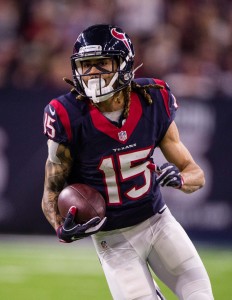 Fuller, who is playing on a $10.16MM fifth-year option salary, profiles as an interesting rental option for the Packers. Through seven games, he’s been Deshaun Watson‘s favorite target, catching 31 passes for a team-high 490 yards and five touchdowns. Of course, acquiring him would mean giving up significant draft capital, especially since the Texans have insisted that they’re not keen on trading players with potential for 2021.

The Packers could certainly use a weapon like Fuller, given their lack of production at wide receiver. Davante Adams has been leading the charge with 43 catches for 502 yards and seven touchdowns in just five games. Meanwhile, the rest of the group has combined for a mere 38 catches, 622 receiving yards, and four scores.

The Packers passed on their opportunity to nab an elite wide receiver in this year’s draft, and they’re window to trade for one is on the verge of closing. The NFL’s trade deadline — 4pm ET/3pm CT — is just hours away.

25 comments on “Packers Split On Trading For Texans’ Will Fuller”