The Seahawks and head coach Pete Carroll have agreed to a multi-year contract extension, as Adam Schefter of ESPN.com reports. No one within the organization has confirmed the news, but one source tells Schefter that the deal will tie Carroll to the club through the 2025 season. 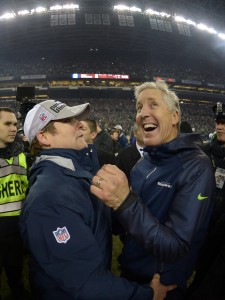 By that time, Carroll will be 74, so this could well be the last contract that he signs. He indicated earlier this year that he wants to coach well into his 70s, and his new extension will give him the chance to do just that.

The Seahawks have starting quarterback and runaway MVP candidate Russell Wilson under club control through the 2023 campaign, so unless something unexpected happens, the most effective QB-HC duo in franchise history will be together for a few more seasons. And considering the success the two have had together, that’s reason for Seattle fans to celebrate.

Hired as the club’s head coach and executive vice president of player operations in January 2010, Carroll has compiled a 106-60-1 regular season record over the past 10+ seasons, to go along with a 10-7 postseason mark. He also guided Seattle to its first Super Bowl victory after the 2013 season.

While Carroll would sooner forget the end of the following Super Bowl, he and Wilson have established the Seahawks as perennial championship contenders. And at 6-1, Seattle is on the short-list of this year’s legitimate Lomardi hopefuls.

Carroll’s last contract paid him an $11MM annual salary, and the extension could push that figure even higher.