Texans defensive back Michael Thomas is done for the year. NFL.com’s Tom Pelissero reports (via Twitter) that the veteran has a torn pectoral and will undergo season-ending surgery. 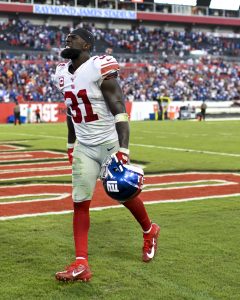 The 30-year-old apparently suffered the injury during last week’s loss to the Browns, but he still managed to finish the contest. The former Pro Bowler is set to hit free agency following the 2020 campaign, and Pelissero notes that Thomas should be “healthy in plenty of time for camp.”

The 2012 undrafted free agent out of Stanford has put together a very solid NFL career. Following a stint with the 49ers to kick off his professional career, Thomas ended up spending five seasons with the Dolphins, starting 25 of his 56 games.

He got a two-year deal from the Giants prior to the 2018 campaign, and he earned his lone Pro Bowl nod that season after compiling 59 tackles, one sack, and two picks. Thomas inked a one-year deal with Houston this past offseason.

One comment on “Texans DB Michael Thomas Done For Season”