Jamon Brown‘s short stint with the Eagles has already come to an end. The veteran offensive lineman was released from the team’s practice squad today, with ESPN’s Tim McManus writing that the transaction was “a result of Brown violating team rules.” 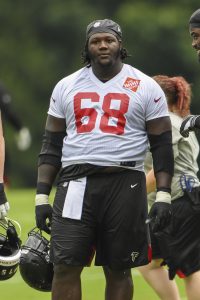 According to multiple reports (including Josh Alper of ProFootballTalk.com), Brown was booted from the team hotel and sent home by Eagles chief security officer Dom DiSandro on Saturday evening. While specifics haven’t been reported, Brown’s banishment was due to “conduct detrimental to the team.” General Manager Howie Roseman and head coach Doug Pederson subsequently spoke with the lineman and informed him he was no longer part of the organization.

Following a disappointing stint with the Falcons in 2019, the former third-rounder joined the Bears practice squad back in September. A few weeks later, the Eagles came in and signed the 27-year-old to their active roster, and he started their Week 6 game in place of injured right guard Matt Pryor.

Brown was cut by Philly in late October but landed on the team’s practice squad. He was promoted to the active roster soon after, but he was demoted following the Eagles Week 7 contest. In total, Brown’s stint with the Eagles ended with him having appeared in two games (one start).