Despite the NFL expanding its playoff bracket to 14 teams, one 10-win AFC squad’s season will end Sunday. The historic depth on display in this year’s AFC may well exclude an 11-win team from the playoffs for just the third time since the 1970 merger. 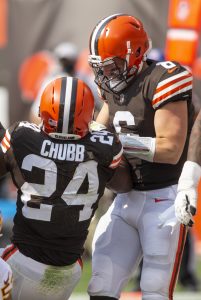 The conference’s Nos. 4-7 spots are not yet determined; the Titans, Dolphins, Ravens, Browns and Colts sit at 10-5. Only the 1985 Broncos and 2008 Patriots — who were left out of five- and six-team AFC brackets, respectively — missed the post-merger playoffs at 11-5. But with none of the 10-win quintet playing one another Sunday, the Colts could join that list.

With the Steelers indicating they will rest Ben Roethlisberger, the Browns would appear to have a strong chance to snap the NFL’s longest playoff drought (18 years). Although they lost 38-6 in the teams’ October meeting in Pittsburgh, the Steelers have not played nearly as well since and have lost key defenders Devin Bush and Bud Dupree. The Browns beat the Mason Rudolph-quarterbacked Steelers 21-7 in Cleveland last year, though the game result became obviously obscured. Football Outsiders gives the Browns a 44% chance to hold at the No. 6 seed and a 20% chance to qualify as the seventh seed.

Sean McDermott has not indicated if he will rest starters against the Dolphins. Doing so would certainly hurt the Colts’ qualification chances, with Indianapolis needing at least one of the other four 10-win teams to lose. The Bills can only drop to the No. 3 spot with a loss and a Steelers win, and given Mike Tomlin‘s decision to rest Roethlisberger, it would not be surprising to see McDermott give Josh Allen a rest or an abbreviated assignment Sunday.

The Dolphins have made the playoffs once in the previous 11 seasons and have benched Tua Tagovailoa twice since naming him their starter. Tagovailoa remains Miami’s QB1, however. Football Outsiders gives Miami a 28% chance to hold at the No. 5 seed and a 29% chance to earn the No. 7 seed in this year’s expanded bracket. While the Bengals knocked the Ravens out of the 2017 playoffs in Week 17, this version is less talented and down its starting quarterback (Joe Burrow) and top running back (Joe Mixon). Of the five 10-win AFCers, Baltimore’s path may be the least daunting. 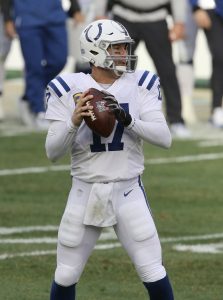 The Colts have seen their Philip Rivers signing produce mixed results, and it is not certain the sides will reunite in 2021. Although Rivers has helped the Colts return to the playoff precipice, the 39-year-old quarterback ranks 18th in QBR. While that figure is north of Rivers and Jacoby Brissett‘s 2019 placements, the Colts have also endured defeats to the Jaguars — their Sunday opponent — and lost by at least two scores to the Browns, Ravens and Titans.

Tennessee also lost to Indianapolis in a blowout and brings a less reliable defense (29th overall) into Week 17. Houston also nearly pulled a Week 6 upset in this matchup, losing in overtime. However, the Texans are without some key players — including Will Fuller and Bradley Roby — going into the rematch. Football Outsiders views a Titans loss in Houston and a Colts win as the most likely way Indy can return to the playoffs, slotting this scenario at 33%.

So which of this quintet will wrap its season early? Vote in PFR’s latest poll (link for app users) and weigh in with your thoughts on this Week 17 gridlock in the comments section.

23 comments on “Poll: Which AFC Team Will Miss Playoffs?”