Earlier this month, we heard that the Eagles were expected to retain head coach Doug Pederson. However, sources tell Chris Mortensen and Tim McManus of ESPN.com that owner Jeffrey Lurie is not confident in Pederson’s vision and that Lurie will meet with his HC soon to hash things out (Twitter link). 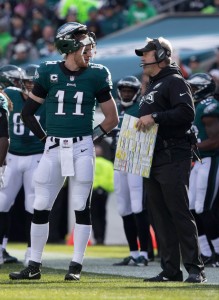 The elephant in the room, of course, is quarterback Carson Wentz, whose struggles have been (fairly or not) attributed to Pederson, and recent reports indicate that the relationship between Wentz and Pederson is fractured beyond repair. However, Mortensen and McManus say that Lurie is not just concerned about the Wentz issue, and as NFL insider Adam Caplan tweets, Lurie is worried about the direction of the offense in general. Jeff McLane of the Philadelphia Inquirer adds that Pederson and GM Howie Roseman — whose job is safe — are growing farther apart on personnel issues, and Pederson himself is upset that Lurie forced him to fire offensive coordinator Mike Groh last year and might insist on more changes this year.

Pederson earned his stripes as the Chiefs’ offensive coordinator from 2013-15, and while his team finished in the bottom fourth of the league in total offense this year, the rash of injuries the Eagles sustained at wide receiver and along the O-line were certainly a major factor in that performance. But injuries aside, the offense has not looked the same since former OC Frank Reich left for the Colts several years ago, which appears to be the source of Lurie’s consternation.

Still, after Pederson guided the Eagles to the Lombari Trophy following the 2017 campaign, his club managed to qualify for the playoffs in each of the next two seasons, despite dealing with myriad injuries in those years as well. He owns a 42-37-1 regular season record in his five-year head coaching career, a mark that looked a lot better before the Eagles collapsed into a 4-11-1 finish in 2020.

If Lurie elects to part ways with Pederson, he will have some catching up to do. The six clubs with head coaching vacancies are already well underway with their coaching searches, and it’s unclear how the top candidates feel about the Eagles’ QB situation.