The relationship between Eagles head coach Doug Pederson and quarterback Carson Wentz is fractured beyond repair, according to Chris Mortensen of ESPN.com. Wentz is expected to ask the Eagles for a trade this offseason and will do whatever he can to facilitate a deal out of Philadelphia. 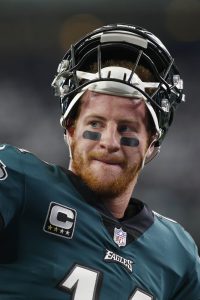 Wentz was benched for rookie signal-caller Jalen Hurts a few weeks ago, but shortly thereafter, it was reported that Philadelphia had not lost faith in Wentz and had no intention of trading him (though that may have simply been a tactic to maintain its leverage in trade negotiations). Wentz, however, was said to be rattled by the team’s decision to select Hurts in the second round of this year’s draft and was upset with how his benching unfolded. As a result, he is looking for a fresh start elsewhere.

Just yesterday, we learned that the Eagles plan to retain Pederson for the 2021 season, so assuming Mortensen’s report is accurate, the club may be choosing its head coach over its former MVP-candidate quarterback. However, Mike Garafolo of the NFL Network says the Eagles still believe the situation is salvageable (Twitter link), so it remains to be seen how aggressive the team will be in trade talks.

If the club does elect to move on from Wentz, a trade is much more feasible than a release. Trading Wentz before the third day of the 2021 league year would result in a dead cap charge of just under $34MM for 2021, but given that Wentz’s cap number for next season is set to be just above $34MM, the Eagles would actually save a bit of cap space and would at least have some draft pick compensation in their pocket. Releasing Wentz would result in a massive dead cap hit of nearly $60MM, and while the Eagles could spread out that hit over two years by designating him a post-June 1 cut, carrying $30MM on the books for two consecutive seasons for a player no longer on the roster wouldn’t make much sense.

Because of the presence of former Eagles OC Frank Reich and their abundance of cap space, the Colts have been rumored as the most likely destination for Wentz in the event a trade is consummated. Indeed, Ian Rapoport of the NFL Network says Wentz would prefer Indianapolis over several other clubs (video link), and if incumbent Colts signal-caller Philip Rivers elects to retire at season’s end, Indy will certainly be in the market for a QB.

Rapoport says that Rivers, who signed a one-year, $25MM pact with the Colts this offseason, is very much open to retirement, and his decision may hinge on whether the team advances to the playoffs. TV networks are said to be eyeing Rivers, who could easily transition to the broadcast booth if he hangs up the cleats.