As expected, the future of Carson Wentz in Philadelphia is fast becoming a hot topic in the NFL news cycle. This morning, Adam Schefter of ESPN.com published a report saying that Wentz is not interested in being a backup quarterback and will ask to be traded if Jalen Hurts continues as the team’s starter. 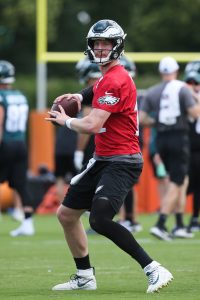 Obviously, no player wants to be a backup, especially a player like Wentz who is not too far removed from being a legitimate MVP candidate and whose massive contract has quickly turned into an albatross. But if his goal is to get a fresh start somewhere else, then leaking his unhappiness might not be the best way to go about it, as it could hurt the Eagles’ leverage with other clubs and add another layer of complexity to trade talks.

According to Schefter, Wentz is unhappy with how his benching has unfolded. It seems his primary point of contention is that head coach Doug Pederson has not said whether the switch to Hurts is permanent, though sources tell ESPN and Ian Rapoport of the NFL Network (video link) that the rookie passer will remain the starter for the rest of the regular season (and presumably into the playoffs if Philadelphia should qualify). Schefter’s report also lends credence to prior rumblings that Wentz’s confidence was shaken when Hurts was selected in the second round of this year’s draft.

Just last week, we heard that the Eagles are committed to Wentz as their long-term solution under center, though many believe that was simply to help themselves in their seemingly inevitable trade negotiations. As we detailed in that story, the club will need to make a decision on Wentz’s future by the second day of the 2021 league year, which will be sometime in the middle of March. On the third day of the league year, Wentz’s 2022 base salary of $22MM becomes fully-guaranteed, and he will receive a $10MM roster bonus for 2021.

In addition to the Colts, Eliot Shorr-Parks of 94 WIP sees the Patriots, Broncos, and 49ers as potential trade partners.

49 comments on “Carson Wentz Not Interested In QB2 Role”