Jason Witten To Retire After 17 Seasons

After two years back in the game, Jason Witten will return to retirement. The future Hall of Fame tight end informed ESPN.com’s Todd Archer he is leaving football for a second time.

Witten retired after the 2017 season but returned to the NFL in 2019, re-signing with the Cowboys. He played the 2020 season as a Raider. When Witten’s one-year Raiders contract expires in March, he intends to sign a one-day Cowboys deal to make this second NFL exit official. 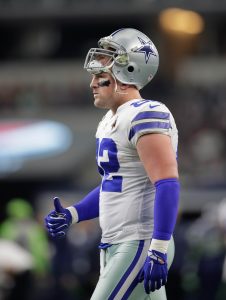 “A coach once told me, ‘The legacy of heroes is the memory of a great name and the inheritance of a great example,’” Witten said, via Archer. “As I hang it up, I walk away knowing that for 17 seasons I gave it my absolute all. I am proud of my accomplishments as a football player on the field and the example I tried to set off of it. Football is a great game that has taught me many valuable lessons, and I look forward to passing on that knowledge to the next generation.”

While Witten was productive upon returning to the Cowboys in 2019, catching 63 passes for 529 yards and four touchdowns, his age-38 season in Las Vegas saw a steep statistical decline. After signing for $4MM in March 2020, Witten caught just 13 passes for 69 yards with the Raiders. Although he did score two TDs — one of which a go-ahead grab late in a shootout against the Chiefs in Vegas — the Raiders had Pro Bowl tight end Darren Waller do most of the heavy lifting on the receiving end.

Witten’s one-and-done Raiders run did allow him to surpass 13,000 receiving yards for his career. Witten and Tony Gonzalez are the only tight ends to do that. No other tight end has ventured past 12,000 yards. The reliable possession cog, however, resides much higher on the receptions list. Witten’s 1,228 catches rank fourth all time — behind only Jerry Rice, Larry Fitzgerald and Gonzalez.

A Cowboys third-round pick in 2003, Witten became one of the most reliable players of his era. He produced four 1,000-yard seasons — each during Tony Romo‘s stay as Dallas’ quarterback — and 11 Pro Bowls. That is tied with Bob Lilly for the most in Cowboys history. A Cowboys cog for 16 seasons, Witten owns the team’s records for receptions, receiving yards, games played (255) and games started (245). The veteran’s one-year stay as a Monday Night Football analyst not going especially well will end up merely delaying his Hall of Fame enshrinement.

17 comments on “Jason Witten To Retire After 17 Seasons”