The Broncos will release defensive tackle Jurrell Casey, as Adam Schefter of ESPN.com tweets. The move will clear $11.875MM from the Broncos’ books and put the veteran on the open market. 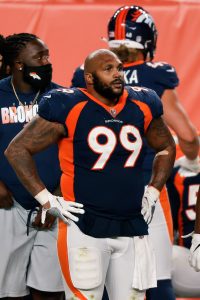 Casey, 31, made the Pro Bowl every year from 2015-2019. And, from 2013-2019, the USC product had at least five sacks from the interior. His best work earned him a four-year, $60.4MM extension from the Titans. Last offseason, the Broncos agreed to take on that contract. All it cost them (besides cash and cap flexibility) was a seventh-round pick.

Unfortunately for the Broncos, Casey’s first Denver season ended in September. Unable to return after a bicep tear, Casey finished out with just three appearances and a grand total of 14 tackles. It was his first season with less than 14 games played and his first ever sackless campaign.

There was no guaranteed money left on Casey’s deal, so the Broncos get to wipe the entirety of his remaining commitment from the books. Heading into today, the Broncos had roughly $166MM on the cap for 2021. Now, between this and the recent release of cornerback A.J. Bouye, they should have upwards of $35MM to spend, depending on where the final cap number lands. For now, all we know is that the cap will be no lower than $180MM, the agreed upon floor for the coming year.