We heard earlier today that the Dolphins and Packers running back Aaron Jones, who is eligible for unrestricted free agency in March, are interested in joining forces. But Green Bay might not let Jones get away. 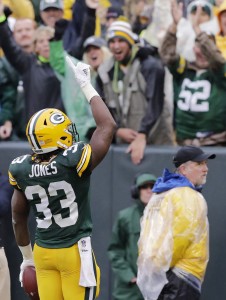 The Packers and Jones have been negotiating a long-term pact for about a year now, but it doesn’t sound as though the two sides are particularly close to an agreement. The club did offer Jones a contract that would have paid him like a top-five RB in terms of average annual value, but the offer was unappealing to Jones because it was lacking in significant guaranteed cash.

Nonetheless, the club is expected to bid adieu to RB2 Jamaal Williams, and given Williams’ impending departure and Jones’ importance to Green Bay’s offense, Jones might be a franchise tag candidate. Indeed, Ian Rapoport of the NFL Network suggests that because this year’s franchise tag value for running backs is so low ($8MM), the Packers may be willing to carry that cost on their books if it means keeping Jones in the fold for at least one more year (video link).

Jones, an explosive playmaker as a runner and receiver who has averaged over 1,500 yards from scrimmage and 15 TDs over the past two seasons, would certainly not be happy about a franchise tag. But while the Packers still have work to do just to get under the cap, to say nothing of a potential re-up for center Corey Linsley, they have to at least give the matter some serious thought.