The Dolphins and Jason Sanders moved fast. Shortly after a report surfaced indicating the sides sought a long-term partnership, Adam Schefter of ESPN.com reports an extension agreement is in place (Twitter link). The team subsequently announced the move. 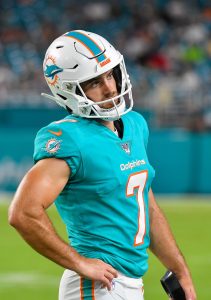 Coming off an All-Pro season, Sanders signed a five-year deal worth $22MM. The three-year veteran kicker will see $10MM of that guaranteed, per Schefter. This will tie Sanders to the Dolphins through the 2026 season. A 2018 seventh-round pick, Sanders only became extension-eligible last month.

On this $4.4MM-per-year deal, Sanders secured a top-five salary at his position. Only Justin Tucker (Ravens) , Graham Gano (Giants) and Ka’imi Fairbairn (Texans) are attached to deals worth more per year, and Sanders’ $10MM guarantee trails only Tucker among kickers.

Sanders, 25, is coming off a dominant season. He made 36 of his 39 field goal tries in 2020 — his second season with at least 90% field goal accuracy — and aided Miami’s offense consistently with long-range precision. The New Mexico product connected on 8 of 9 tries from beyond 50 yards.

This marks the latest extension agreement in GM Chris Grier‘s tenure atop Miami’s front office. Despite Grier not being in charge of Dolphins personnel prior to the 2019 offseason, he has authorized notable extensions for previous Dolphin draftees Sanders, Xavien Howard and DeVante Parker