The upcoming free agent tight end market is getting another notable name. The Jaguars will decline the 2021 option on Tyler Eifert‘s contract, Ian Rapoport of NFL Network tweets. 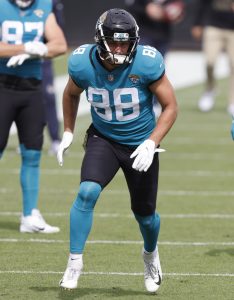 As Rapsheet points out Eifert had been set to make a little under $5MM in 2021, and they understandably viewed that as a little hefty given his production this past season. In 15 games and four starts with the Jags in 2020, he caught 36 passes for 349 yards and two touchdowns. It was his first year in Jacksonville after spending the first seven seasons of his career with the Bengals. The receiving numbers don’t jump off the page, but on the bright side he was able to stay healthy for the second season in a row.

Eifert broke out and became a big name during the 2015 season, when he turned a strong connection with Andy Dalton into a whopping 13 touchdowns and a Pro Bowl berth. Unfortunately things went downhill fast after that due to a string of serious injuries, and he would only play in 14 total games over the next three seasons.

The 21st overall pick of the 2013 draft bounced back to play all 16 games in 2019, which earned him the two-year contract from the Jaguars which turned out to be one year plus an option. Eifert will now be hitting a tight end market that has some solid options, including Hunter Henry, Rob Gronkowski, Jonnu Smith, Gerald Everett, and Jared Cook.

9 comments on “Jaguars To Decline Option On Tyler Eifert”