Marvin Jones will be looking to play for a contender in 2021. In an interview with SiriusXM, Jones said that he’ll be looking to join a winner, though he still wants to get a fair value deal. 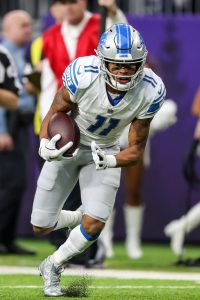 “At this point in my career, that’s what I want,” Jones said. (via Dave Birkett of the Detroit Free Press). “But at the same time, it’s not going to be — I’m not going to just straight sacrifice and not get what I’m worth just because I’ve put in my work to get where I’m at and it happened the first time and I did it, and I think I outplayed it the second time.”

Jones signed a five-year $40MM deal with the Lions in March of 2016 with $13MM fully guaranteed. He went on to have the most efficient year of his career in 2017, averaging a league-high 18 yards per grab. After that, injuries and issues with the Lions’ offense slowed him down a bit, though he’s remained productive. Last year, Jones turned in his best stat line since ’17 — 76 grabs for 978 yards and nine touchdowns.

Jones, 31 in March, will enter free agency as one of the best receivers available, just behind the likes of Allen Robinson and Chris Godwin. A return to the Lions still remains possible, but Jones would be catching passes from Jared Goff rather than longtime pal Matthew Stafford.