Ryan Finley isn’t getting cut after all. On Friday, the Bengals agreed to trade the quarterback to the Texans in an exchange of late-round picks. The Bengals will move up ~30 spots in the swap as they send Finley and a 7th-round pick to the Texans for a sixth-round pick (Twitter link via Adam Schefter of ESPN.com). Rather than their original sixth-rounder, the Texans are sending the choice that originally belonged to Miami. 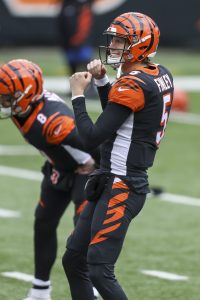 Finley wound up starting as a rookie when Andy Dalton got the hook. The 2019 fourth-round pick was 0-3 in his starts with two touchdowns against two interceptions. He got a chance to start once again in 2020 when the Bengals faced the Steelers in Week 15. He absorbed a devastating hit in that game and only completed about half of his 13 throws, but he did manage to emerge as the winning QB.

The Texans have been actively bargain shopping in recent days. Needless to say, this isn’t the Houston QB news that everyone has been waiting on. At last check, the Texans are still refusing inquiries on Deshaun Watson. Meanwhile, Watson is making headlines for a string of off-the-field allegations.