Josh Wells is on track to spend another season in Florida. The Buccaneers are re-signing the veteran offensive lineman, Greg Auman of The Athletic tweets. 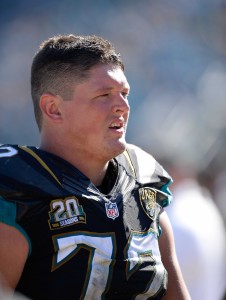 The former Jaguars tackle agreed to stay with the Bucs on a one-year deal, with Auman adding the agreement will be worth the veteran minimum. Wells will sign for $990K; $500K of this low-end pact is guaranteed (Twitter link via Auman).

Wells has served as a swing tackle during his two seasons in Tampa. He played that role for the Bucs’ Super Bowl champion team, starting one game and playing in 15. Wells, 30, has operated in this capacity for most of his career. The former UDFA topped out at five starts, doing so with the 2018 Jaguars, but has opened with the Bucs’ first-stringers three times in two seasons.

Wells will join a host of free agents that have agreed to stay in Tampa this month, following the likes of Shaquil Barrett, Lavonte David, Rob Gronkowski and Ndamukong Suh. This is not a similar needle-moving agreement, but Wells has provided depth behind the likes of Donovan Smith and Tristan Wirfs.