Larry Fitzgerald has played the past five seasons on one-year contracts, but the future Hall of Fame wide receiver had decided on a return by this point in each of those preceding offseasons.

Over the past three years, Fitzgerald decided to return in February 2018 — honoring a one-year extension he inked the previous November — and in January of 2019 and 2020. In each of the past five seasons, Fitzgerald’s going rate has been $11MM. Another such payment will be difficult to justify, given the Cardinals’ cap situation and Fitz’s performance in 2020. 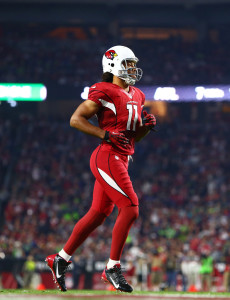 But the 37-year-old wideout still appears to have a place on the 2021 team, Darren Urban of AZCardinals.com writes, should he decide he wants to play an 18th season. Fitzgerald said in February he did not have a timetable on whether he would retire or return. He was similarly mum when the topic resurfaced last week.

“I’ve said it a few times that you know he deserves that space,” Cards GM Steve Keim said. “At some point in time, I’m sure we’ll talk to him here in the near future.”

Last season, Fitzgerald fell off the consistent track he had traveled. He averaged just 7.6 yards per reception (54 catches, 409 yards, one touchdown) and missed three games. Fitz was one of many NFLers to contract COVID-19, and he experienced symptoms that sidelined him for two games. He then missed Week 17 because of a groin injury — his first injury-related absence since the 2014 season.

The Cards have DeAndre Hopkins signed to a $27.3MM-per-year pact, but he is on their 2021 cap sheet at just $12.5MM. Christian Kirk has one season remaining on his rookie contract. Arizona has $12.5MM in cap space and has younger pending free agents in Patrick Peterson, Haason Reddick and Kenyan Drake.

Even if Fitzgerald comes back, the team will still likely add at the receiver position to provide Kyler Murray more help. But a decision should be expected soon, and it will almost certainly determine if Fitzgerald heads to Canton in 2027 or 2028. He ranks second all time in receptions, with those 1,432 catches leading active active pass catchers by more than 500. Fitz’s 17,492 receiving yards are also second; that number leads active players by over 4,500 yards.