Chiefs To Meet With K’Waun Williams

K’Waun Williams will get together with the Chiefs on Tuesday, as Mike Kaye of NJ.com tweets. The Jets are also said to have interest in the former 49ers corner, so he could be on the verge of a deal this week. 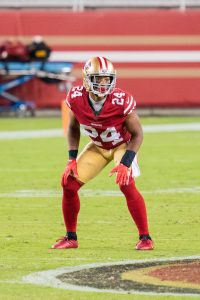 Pro Football Focus graded Williams as the league’s No. 7 overall corner in 2019. In 2020, he was slowed down by knee and ankle injuries. Ultimately, he played in just eight games, compiling 22 tackles, two sacks, and one forced fumble. Of course, he wasn’t the only Niners player to be hit by the injury bug. All in all, eight different players started at corner for the 49ers last year.

The 49ers recently re-upped Jason Verrett on a one-year deal worth up to $5.5MM, so it’s not clear if there’s still room to retain Williams. Meanwhile, the Chiefs could install Williams as their new starting slot corner, push L’Jarius Sneed to the outside.

One comment on “Chiefs To Meet With K’Waun Williams”