The Falcons have agreed to sign linebacker Barkevious Mingo (Twitter link via NFL.com’s Ian Rapoport). His one-year deal is worth $1.25MM with $1.1MM guaranteed, according to ESPN.com’s Michael Rothstein. 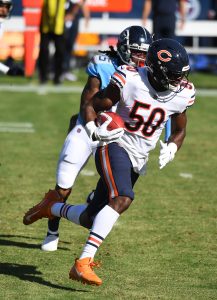 Mingo, a 6’5″, 235-pound ‘backer, spent last year with the Bears. He appeared in 36% of the team’s snaps but played a much larger role on special teams. On defense, he finished with a total of 35 stops and 2.5 sacks while appearing in all 16 games.

The LSU product entered the league with lofty expectations as the No. 6 overall pick in the 2013 draft. That pick didn’t exactly work out for the Browns, but Mingo has enjoyed a solid career over the last eight years. His 2016 stop in New England yielded a Super Bowl ring and he’s now signed for his ninth season in the league.

Mingo will be joined by lots of fellow fresh faces in Atlanta, including the newly-signed Mike Davis.