Following the Vikings’ decision to part ways with Kyle Rudolph, he is a first-time free agent. The veteran tight end would not mind linking up with a longtime Vikings assistant. 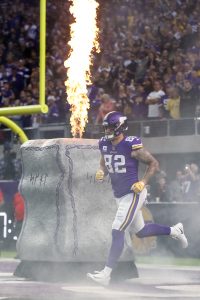 Rudolph is interested in joining the Browns, with Mary Kay Cabot of cleveland.com noting the 10-year pass catcher would “love” to rejoin Kevin Stefanski in Cleveland. Stefanski was with Minnesota for Rudolph’s first nine seasons. The reigning NFL Coach of the Year worked as the Vikings’ OC in 2019 and served as Rudolph’s position coach from 2014-15.

The Browns gave Austin Hooper a $10.5MM-AAV deal at free agency’s outset last year and have David Njoku under contract for 2021, having picked up the former first-rounder’s fifth-year option. However, Njoku did not play a major role in Stefanski’s offense last season.

Over the past two seasons, Njoku has just 24 receptions. The four-year Browns contributor is sounding like the team may move on from him (Twitter link), potentially via trade or release. He requested a trade last year but moved off that stance, but his future in Cleveland still appears murky. Since Njoku is a 2017 first-round pick, his fifth-year option is guaranteed for injury only. A Njoku release would create just more than $6MM in cap space for the Browns.

Far and away the leading touchdown scorer (among tight ends) in Vikings history, Rudolph scored six in Stefanski’s offense in 2019 and added a playoff walk-off soon after. The two-time Pro Bowler, however, has not eclipsed 400 receiving yards since the 2018 season. At 31, the 6-foot-6 talent still figures to receive interest. He was involved in trade rumors during the 2019 draft and ahead of the 2020 trade deadline.