A Lion since midway through the franchise’s Matt Millen era, Don Muhlbach agreed to come back for an 18th season with the team. 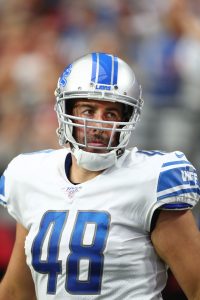 The Lions have again re-signed their longtime long snapper. Muhlbach, who will turn 40 in August, has played on one-year deals worth the veteran minimum for the past eight years. It seems unlikely this contract will break the trend. He made $1.05MM in base salary last season; that is firmly in the well-defined long snapper tax bracket.

Muhlbach suited up for 16 games last season, moving his career total up to 260. While that ranks in the top 10 all time for games with one franchise, it interestingly is not No. 1 in Lions history. Jason Hanson‘s 327 games are the most any NFLer has played with one team. Muhlbach snapped to the since-retired kicker for nine seasons.

The enduring former UDFA will play under a sixth head coach next season (Dan Campbell), should he make the Lions’ 53-man roster. Muhlbach’s most recent camp challenger, Steven Wirtel, is now with the Rams.