The Seahawks have locked up Tyler Lockett for the long haul. On Wednesday, the two sides agreed to a four-year, $69.2MM extension (Twitter link via ESPN.com’s Adam Schefter). The deal includes $37MM in guaranteed cash and likely tamps down his scheduled $14.95MM cap hit for 2021. 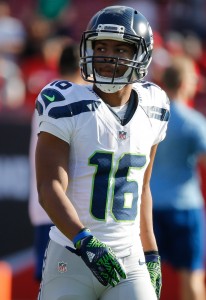 Despite questionable depth at wide receiver, the Seahawks abstained from this year’s best available options. This new deal underscores their confidence in Lockett — not just for this year, but for many seasons to follow. For now, the Seahawks are set to enter 2021 with Lockett and D.K. Metcalf leading the charge with support from Freddie Swain, Cody Thompson, John Ursua, Darvin Kidsy, Aaron Fuller, and Penny Hart.

In addition to Lockett, the Seahawks have also re-upped guard Gabe Jackson with a three-year, $22.58MM extension. Meanwhile, on the other side of the ball, they moved on from defensive tackle Jarran Reed. With the 28-year-old out of the picture, their DL group will feature Kerry Hyder, Benson Mayowa, Carlos Dunlap, Poona Ford, and old pal Al Woods.