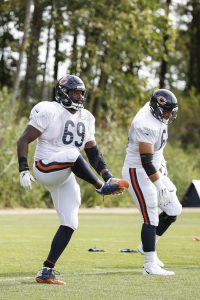 Coward was a restricted free agent who was not tendered by the Bears, leaving him free to sign with any team. Coward is an interesting player, since when he entered the league as an UDFA out of Old Dominion in 2017 he was a defensive end. He was on defense during his rookie year with Chicago (mostly on the practice squad), and then made the switch to offensive line the following year.

In 2019 he was thrust into starting action despite still being very new to the position after Kyle Long went down with an injury. He started ten games at guard that year. This past season he appeared in all 16 games and started five at left guard, playing just over 30 percent of the offensive snaps.

Since he’s still only 26 and only just recently started playing guard, it’s an intriguing low-risk signing for the Steelers with some upside. Considering they’ve already lost significant pieces of their offensive line like Maurkice Pouncey and Matt Feiler this offseason, it can’t hurt to start throwing darts.