Texans brass has continued to insist Deshaun Watson will not be traded, but the team is signing another starter-caliber quarterback. They agreed to terms with Tyrod Taylor on Tuesday, Adam Schefter of ESPN.com tweets. 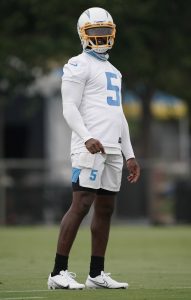 The now-well-traveled stopgap starter/backup option can make up to $12.5MM on this one-year deal with Houston, Schefter adds.NFL.com’s Tom Pelissero reports (via Twitter) that Taylor’s deal has a base value of $5.5MM, including $2.5MM guaranteed.

While Taylor would certainly not be an impediment to Watson, were Houston’s starter to reverse course, the 10-year vet represents a potential bridge option for a Texans team attempting to avoid a major transition.

Houston will add Taylor on an incentive-laden deal similar to the contracts Cam Newton and Jameis Winston recently agreed to, Tom Pelissero of NFL.com tweets. It would seem Taylor’s compensation will largely depend on how Houston proceeds with Watson.

Following Philip Rivers‘ defection to the Colts last year, the Chargers turned to Taylor. But a mishap with a pregame injection resulted in an earlier-than-expected transition to Justin Herbert. Taylor’s previous understudy started the Bolts’ final 15 games, earning Offensive Rookie of the Year acclaim. Taylor has now been a backup for most of the past three seasons.

Entering his age-32 season, Taylor has started just four games since 2018. Prior to that, however, the dual-threat QB did operate as Buffalo’s starter for three seasons. New Texans HC David Culley was Taylor’s position coach in 2017. While the risk-averse passer did well to limit turnovers, he did not offer much in the way of upside. That remains the case. Taylor would make sense as both a Watson backup and, in what would be the Texans’ emergency scenario, a bridge starter as the team attempts to construct a rebuild effort.

The bridge-QB market has moved since Monday night. Taylor, Ryan Fitzpatrick and Andy Dalton have chosen destinations. They followed Newton in doing so. Each could well be starters next season. Like Washington, Chicago and New England, the Texans are not in position to land one of the top quarterback prospects in the draft. As of now, they do not hold a first- or second-round pick this year. While Watson would net the Texans a bounty of picks, Culley and GM Nick Caserio have insisted — the former in roundabout fashion — that Watson was not going anywhere.